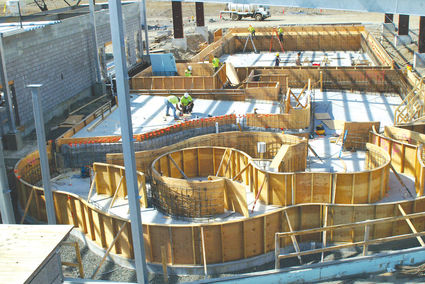 While no one actually pointed fingers in the Airway Heights Council Chambers at the City Council’s first meeting of the year, the Jan. 7 gathering was undeniably tense as city officials met with project managers to discuss why the recreation center construction project is significantly behind schedule.

The city’s new recreation complex, ringing up at an eye-popping $17.26 million, was intended to be complete and open for business at the end of 2018. That deadline was later bumped to March, and has been pushed back even further to the second week of April.

Now, the professional project and construction managers overseeing the recreation center project require an additional $30,000 for services extended beyond the original contract.

The existing agreement with Hill International, a construction consulting firm, was executed on Nov. 20, 2016 with the city paying just over $172,000 for 15 months of construction duration.

According to a letter sent from Hill International to city officials, the additional three months of construction and extra effort expended to combat construction delays contributed to the added fee.

The $30,000 in additional funds is the first expense for the recreation center over its maximum budget allowance, inching its total price tag closer to $17.3 million. The city unanimously authorized the contract amendment following a lengthy discussion on the causes and consequences of such a delay.

According to Hill International project manager Pat McCord, the standard permitting process for an undertaking of this size should be eight to 10 weeks. The necessary permits for Airway Height’s recreation center took nearly eight months.

“The project eked along as best it could, but the momentum was lost,” McCord said. “We tried to expedite the process, but the building department was unresponsive.”

Grass meant to be planted before winter to allow sprouts to take root were seeded late, while some rooms could not be sealed off while workers waited for certain documents to be processed. McCord even suggested that Lydig Construction was being forced to work ahead of the permits.

“It is at their own risk, but we know that they’re putting in things that aren’t technically approved yet,” McCord said.

Some council members noted that it was city staff’s first time permitting a design-build project of this magnitude, while City Manager Albert Tripp suggested that the communication between city building inspectors, subcontractors and recreation center construction leaders could have been better.

“We’ll get it figured out,” Mayor Kevin Richey said. “I’m sorry it was so frustrating, but we’ll work on it.”

Parks, Recreation and Community Services Director J.C. Kennedy said the issue was simply timing, not the quality of work.

Kennedy said the estimated opening date at the moment is still the second week of April, but contract amendment documents indicate that the project might not be 100 percent complete until May 2019.