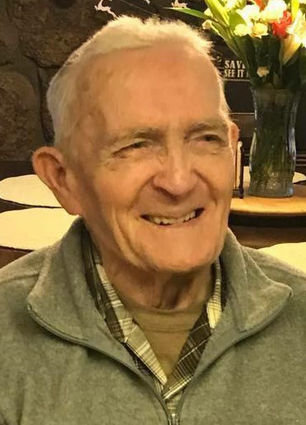 Elvin Maynard Salter was born on May 13, 1925 in Almira, Wash. to parents Milton C. Salter Sr. and Gerda Eliason Salter. Elvin was raised by Ollie and Lillian Flenton when his mother passed when he was just two years old. He passed away at 92, surrounded by family at Walla Walla Veteran's Home on April 29, 2018.

Elvin joined the United States Marine Corps at 17-years-old serving in World War II in the Pacific Theatre and China. After the service he worked as city manager of Cheney, Chewelah, and Blaine, Wash. He then spent time as the Adams County road superintendent and most recently as the manager of Highland Manor Apartments in Hermiston, Ore.

Elvin married Dorothy Mosier, Oct. 6, 1946 ending in divorce in 1980. They lived in Cheney where they raised six sons and two daughters.

Elvin married Cindy (Riese) Cox in Coeur d' Alene, Idaho on April 7, 1984. They lived in Blaine and Othello, before they settled in Hermiston where he raised his two step-daughters.

Elvin enjoyed the rodeo where he participated in bull and bronc riding. He loved the outdoors while fishing, camping and hiking. Elvin was a Boy Scout Scoutmaster in Cheney. He also enjoyed spending time with his grandchildren.

Elvin was a hard worker with a great sense of humor and dedicated family man. He will be dearly missed by his family and friends.

At Elvin's request, no services will be held. Arrangements are in the care of the Neptune Society of Washington. A celebration of life gathering will take place at a later date. Memorial contributions may be made to the Alzheimer's Association.