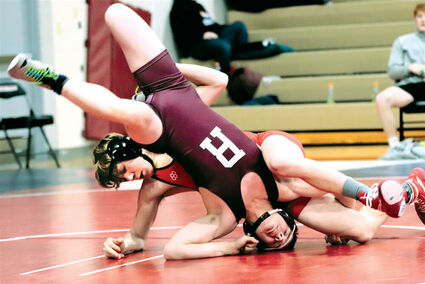 Mason Bennett of Cheney tosses Troyt Routh of Reardan in the 145-pound championship match at the Medical Lake Scramble on Saturday, Dec. 5. Bennett won the bout, 5-0, and the weight class title.

MEDICAL LAKE--The Reardan wrestlers earned a second-place finish at the Medical Lake Scramble on Saturday, Dec. 3. The host Cardinals finished fifth out of the 10 teams in the tournament.

Pullman won the event with 266 points while Reardan had 206. Lewis and Clark placed third with 165 points, followed by Rogers who had 150 points.

Medical Lake scored 116 points, which put it in fifth place, and West Valley placed sixth with 105 points. Cheney had 101 points, Mt. Spokane had 69 points, Lind-Ritzville had 29 points and Tekoa-Rosalia had 28 points.