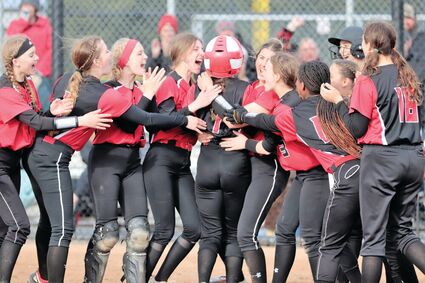 Liberty (Spangle) batter Anna Pittman is welcomed at the plate after hitting a home run in the Lancers' upset of the Colfax Bulldogs in the Northeast 2B District 7 championship game Saturday, May 21, at the Dwight Merkel Sports Complex in Spokane following a lengthy rain delay. Both teams now head to state in Yakima

YAKIMA - The Liberty Lancers are taking their District 7 title into the state 2B girls fastpitch softball tournament Friday and Saturday at Gateway Park.

Despite upsetting Colfax to win the district title Saturday, May 21, the girls from Spangle, Waverly and Fairfield are seeded No. 7.

Meanwhile, the Colfax Bulldogs are seeded No. 5 into the state tournament.

The state berths follow the Lancers' 6-5 upset of the Bulldogs in the District 7 ch...