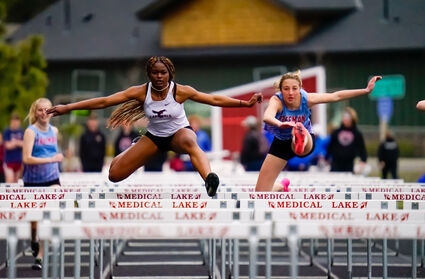 Despite all of her effort in the women's 100-meter hurdle race on April 27, Cardinal Amblessed Okemgbo was edged out for second place by Freeman's Naomi Turk. Okemgbo finished 3rd with a time of 18.48 while Turk finished at 18.47.

MEDICAL LAKE-For the fifth straight meet, the Cardinal women's team scored triple digits with a 100-48 win over Freeman on April 27. The Medical Lake boys' team fell to the Scotties 73-70, although their performance Coach Blankenship said was better than anticipated.

Blankenship noted many athletes excelled during the meet, including those participating in the running, jumping, and throwing events. A total of 21 athletes on both the boys' and girls' teams set personal records on the day.