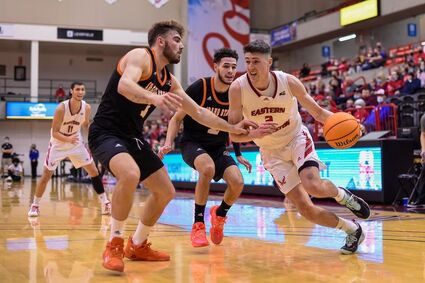 Eastern Washington's Steele Venters cuts around defenders Liam Sorensen and Tarik Cool while trying to drive to the basket during the game on Feb. 12.

CHENEY – A solid first half for the Eagles helped them hold off a late-game push by Idaho State, and Eastern turned back the Bengals 75-72 at home on Feb. 12. It was the second win in a row for the Eagles, who got past Big Sky Conference leader Weber State 75-67 on Feb. 10.

The Bengals opened the scoring with a three-pointer a minute into the game. Both teams battled to keep the score close early on.

But little over halfway through the first half, the Eagles were able to find some rhythm and began to pull away on a layup and a couple of Rylan Bergersen free throws put Eastern up 20-15.