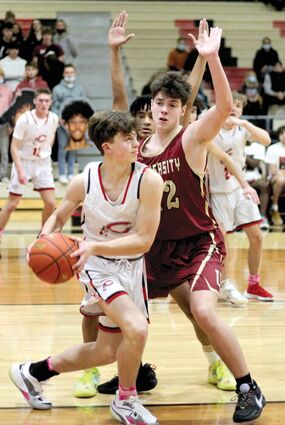 For the second game in a row, Cheney dressed only eight players, including three promoted from the freshmen team.

ankle and was finished for the night.

“We played very hard and had nothing to lose,” he said.

Cheney wasn’t the only team short a key player, as 6-foot-9 post Conrad Bippes was under the weather and didn’t play.

But U-High still had a dominating roster against Cheney’s remaining “Magnificent 7.”

The Blackhawks boys got off to a solid start, leading after the first 4 minutes, 7-3. Seven first quarter points by freshman guard Camden Collins kept Cheney close, and the Hawks were only down 3 at the quarter, 16-13.

A great Cheney defense and erratic Titan shooting held U-High to 2 points in the first 4:30 of quarter 2, and the game was tied at 18.

It was more of the same in the third period as Josh Whiteley hit 7 points and a 3-pointer by Cordell Laher kept Cheney close. The quarter ended with the Titans up, 40-33.

Then the Blackhawks ran out of gas.

In the final quarter, they were outscored, 16-5, as Sibley, an all-league guard scored repeatedly and upped his game leading total to 31.

When the University and Cheney boys faced off earlier in the season, the Titans defeated a full Blackhawks roster, 90-67.