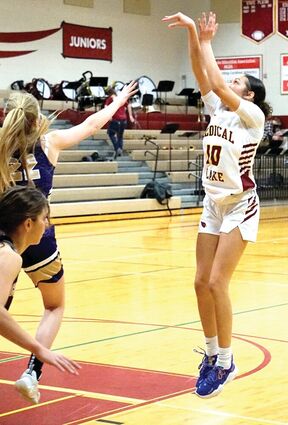 MEDICAL LAKE – The Medical Lake varsity basketball teams are off to a solid start this season, beating both the Connell Eagles and Northwest Christian (Colbert) Crusaders this week.

The varsity teams faced off against the Eagles on Dec. 10.

The Cardinal girls dominated with a 54-28 win over Connell.

Charde' Luat led the Cardinals in scoring with 20 points and impacted the game with some assists and steals as well.

Kiyah Hatcher finished with 9 points and several assists and rebounds.

The boys varsity team also beat Connell, but the margin was much closer as this game was battle start to finish.

Neither team was able to pull away by a substantial margin, and it was bucket-for-bucket through the entire game.

Noah Kiester had 16 points to lead Medical Lake, and Oran Rhimer added 11 points with a handful of assists.

Tyler Sembly had 10 points and several rebounds on the night impacting the game on both offense and defense.

Sembly would also pass the ball to team mate Landon Hall as the final second ran down, and Hall drained a buzzer beating 3-point shot.

Fans rushed the court and surrounded the team, as it marked the first win of the season for the Cardinal boys.

On Monday, Dec. 13, Medical Lake played against Northwest Christian and both teams came away with strong victories.

In the boys game, the Crusaders took an early 14-12 first quarter lead. But the Cardinal boys came to life in the second quarter, outscoring Northwest Christian 18-9, to take a 30-23 lead to the locker room at halftime. 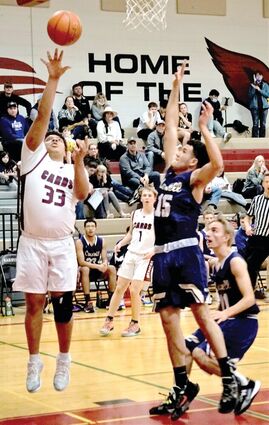 In the third and fourth quarters, the local boys continued hitting buckets, and put up an impressive 29 points in the fourth quarter alone.

In the girls matchup, it was Luat leading the Cardinals with 13 points, followed by teammate Ellie Haas with 11.

The top scorer for Northwest Christian was Ilia Larson with 8 points.

The local girls blew the game open in the first quarter and never looked back.

The Cardinals took an 18-11 lead in the first quarter and expanded the margin by 7 points in the second quarter and 11 more in the third.

In the third quarter, they kept Northwest Christian scoreless.