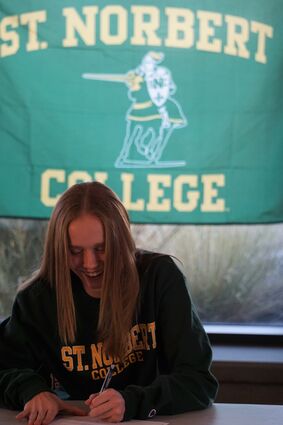 Janie Richards from the Cheney High School swim team smiles in front of her family and peers as she signs her letter of intent to accept scholarships for St. Norbert College in Wisconsin.

Richards was offered a four-year scholarship of $21,000 per year, her mother, Kelly Richards, said.

Kelly Richards said the swimming program in the college is relatively new and is in NCAA Division III. "She is on track to graduate high school with 90 college credits, having participated in the Running Start program at Eastern Washington University for past two years," she said.

Janie Richards said she has been swimming since she was in third-gra...