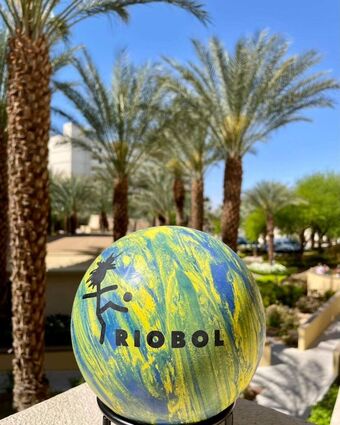 Soccer training ball Riobol has local ties with one of the company's owners being from Cheney.

CHENEY - A new brand of training ball with local connections has found its way onto the soccer fields of Eastern Washington and Nels Radtke, the head coach Cheney High School's women soccer team, has been impressed.

Founded by Matt Folsom and Elliot Fauske, Riobol (pronounced rio-ball) is a small rubber ball designed in Brazil intended to improve control, shooting, and technique due to the implements decreased size and increased weight. And the results of have been promising.

The unique tool was first discovered years ago by Elliot Fauske while playing professional soccer with a Brazilian and he was immediately impressed by the degree of benefit the simple ball offered. "These are the most skilled players in the world, and they were doing nothing more than Riobal skill drills and speed and agility training," Fauske said. "By the end of those two weeks every player had developed instinctive ball control and a hunger for the game. When we finally started playing again, it felt like I was kicking a beach ball. I had never had better ball control."

But when he returned to the United States, he was shocked to discover there was no equal on American soccer fields, and soon devised a way to bring the ball to an US audience. Partnering with Matt Folsom, a former Cheney resident with 20 years of coaching experience, the duo launched Riobol to wide acclaim.

"The Riobol is a great training tool that our participants enjoy using!" wrote Spokane Soccer Academy Director Kevin Moon. "We used to use a similar ball at Whitworth University, and I had been looking for some to purchase for several years with no luck and had given up hope. Thankfully we found the Riobol and have been using them in our training with some of our age groups. Players love it as it is something different and always look forward to using it as part of our warm-up!"

Among the new clientele for Riobol is the Cheney women's soccer team. The company sponsored Cheney's recent youth camp that saw a record 37 athletes, and each player was gifted a Riobol at the conclusion. "I purchased a team set of Riobals this past year and saw a lot of improvement from my players in the sort of season we had this past spring," wrote Radtke.

The company already boasts an impressive track record with participating teams competing in top-tier tournaments in Washington, Idaho, and Nevada. In addition to the fantastic record, they also donate a portion of the proceeds, "towards soccer parks in the poorest communities," with the motto: "Every child deserves a place to play."

Scott Davis can be reached at news@cheneyfreepress.com.