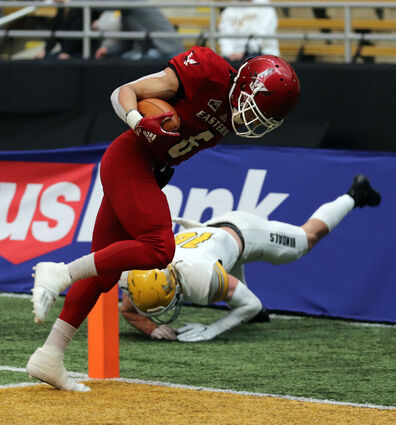 Eastern's Dennis Merritt dances inside the pylon for the Eagles' second touchdown and early 14-0 lead at Idaho Saturday afternoon.

MOSCOW, Idaho - Eastern Washington scored early, but the University of Idaho got its points when things mattered the most to claim a 28-21 Big Sky Conference spring season football victory Feb. 27 at the Kibbie Dome.

In collecting their second consecutive victory over Eastern, Idaho slowly recovered from an early 14-0 deficit. The Vandals scored the winning points with just 54 seconds to play on a Mike Beaudry to Hayden Hatten 25-yard touchdown pass.

The game was the first in 15 months for either team due to restrictions imposed due to COVID-19 and is part of a six-game "spring season." It...