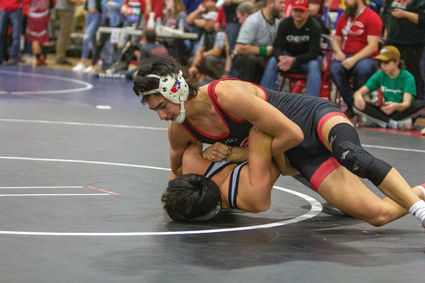 Cheney's Teagan Simon locks-up his opponent during his match in the 152-weight-class during the Blackhawk Invite Saturday in Cheney. The Blackhawks took third out of 19 participating teams, missing second place by half a point.

CHENEY - Blackhawk wrestlers wrangled their way to a third-place team finish at their own Blackhawk Invitational on Saturday with a 181.0 overall team score, giving up the second-place slot to Lakeside by half a point.

That half-point head coach Jason Connor blamed on a "mental mistake" that cost the team a point - and second place.

Junior Dylan Straley took first on a major decision in the 145 weight class to improve his 17-1 record, while Ashton Geiger won his fifth-place match with a pin in 2 minutes, 26 seconds.

In the 152 class, junior Jackson Showalter nailed a first-place finish with...