Cheney crew improves to 2-5 overall, tied with Pullman for second in GNL 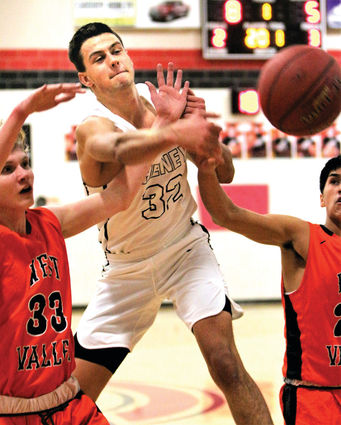 CHENEY – It took a fourth-quarter comeback for the Blackhawk boys’ basketball team to earn their first winning streak of the season, even if it is only two games so far.

Cheney rallied from a nine-point deficit early in the fourth to eventually knock off visiting West Valley 64-59 last Friday night, Jan. 3. The Blackhawks were aided by a stingy defense that kept the Eagles scoreless for the last 4 minutes and 56 seconds of the game, all the while finding their offensive rhythm many might have thought got left in the locker room at halftime.

After cruising to a 31-26 lead at intermission, the Blackhawks were outscored by the Eagles 25-15 in the third quarter — an eight-minute period head coach Frankie Keplinger said has posed a problem all season. But the first-year leader had some words of advice for his players.

“Just keep your composure, stay with your game plan and everything will be OK, and that’s what we did,” Keplinger said.

The Blackhawks switched from man to zone defense in the fourth, and Keplinger said the change caught West Valley off guard, opening up some good looks at the basket. Josh Whiteley and Quinsie Goodloe capitalized on this with key 3-pointers, and forward Alex Long made three big rebounds and a couple of free throws late with Cheney up by three to help seal their second win.

Kaiden Custer led the Blackhawks with 20 points, with Goodloe adding 11 and Long 10.

Cheney improves its record to 2-6 overall, 1-1 in Great Northern League play while West Valley drops to 4-5 and 0-2. The Blackhawks have key league games this week, traveling to East Valley (4-7, 1-2) to face the fourth-place Knights on Tuesday and returning home to host second-place Pullman (5-4, 1-1) on Friday.

Keplinger said the Knights are improved from last season, and have a couple players underneath the basket who present a size matchup challenge for the Blackhawks. Pullman also has some size down low, but Keplinger feels his team can counter this with both schools and create some mismatches they can exploit.

The Blackhawks are focused on improving defensively, and have been hard at work on offense, installing five new sets since their win over Lake City. Keplinger said his players are enthusiastic, and feel they have an excellent chance of moving up quickly in the GNL standings.

“Wins put us in second place with Clarkston coming in (Jan. 14),” he said. “The kids are really into it right now. We’re excited, no doubt about it.”