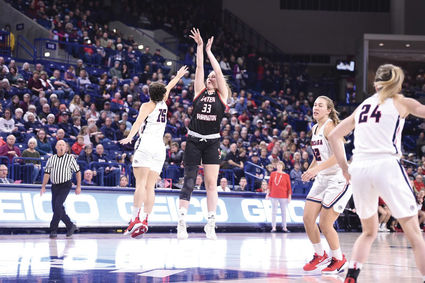 Eastern's Grace Kirscher goes for three during the Eagles loss to the Gonzaga Bulldogs on Friday, Nov. 22 in Spokane.

SPOKANE - The Eastern Washington University women's basketball team took on No. 21/23 ranked Gonzaga University in front of a sold-out crowd at the McCarthey Athletic Center on Friday evening, Nov. 22.

Grace Kirscher led the Eagles with 15 points, but the Eagles fell by a final score of 84-44.