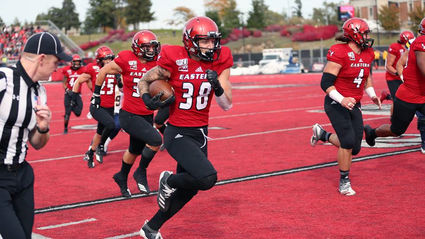 Eastern Washington University defensive back Joe Lang sprints down the sidelines for a fumble recovery for touchdown Saturday afternoon in the Eagles 54-21 Homecoming win over Northern Colorado.

The Eagles took a 40-0 lead into the halftime locker room, helped by scoring 17 points in a four-and-a-half minute stretch, six scored on a 34-yard fumble return for a touchdown by Joe Lang after a force by Tre Weed. That helped EWU score 30 points in the quarter and take a 40-0 lead at halftime as EWU finished the game with its 17th-most yards in school history and had its 63rd game with at least 50 points (record of 60-3).

On its way to a dominating 637-352 advantage in offense – 409-112 in the first half alone -- Eastern established a new school record for consecutive home victories at the current site of Roos Field (formerly Woodward Field), plus extended a long winning streak over UNC. Both streaks are at 12, as EWU hasn't lost a home on the red turf since Nov. 4, 2017. The Eagles fell at Northern Colorado in 1981, but haven't lost since in the 13-game history of the series. Eastern's 12-game winning streak includes the last 11 with the Bears as a member of the Big Sky Conference.