Or, training for spring sports on fields buried in 18 inches of snow 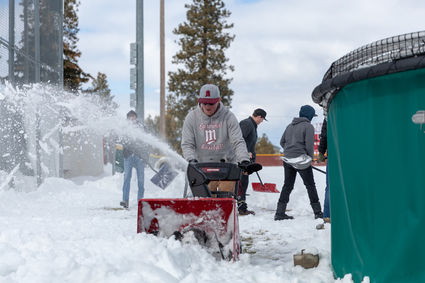 Training for spring sports normally has its challenges, but when winter decides to show up several weeks late, then hang on indefinitely, it can make for some adaptations by coaches and their teams.

Such was the case in Medical Lake last Friday.

Head coach Austin Sharp and assistant coach Fred Wagner, along with a select crew of volunteers from the Cardinal baseball team, took to the infield in an effort to, if not create some space to practice, at least hasten the eventual snow melt and recovery of the turf that was covered with roughly 18 inches of snow.

They made a heroic effort using tw...