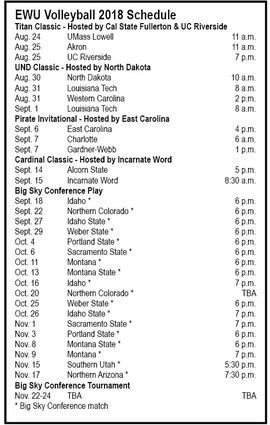 After nearly two weeks of preseason training, a new era for Eastern Washington University volleyball under first-year head coach Leslie Flores-Cloud officially begins this week when preseason matches get underway at the Titan Classic at Cal State Fullerton University. The Eagles open against the University of Massachusetts at Lowell on Friday, Aug. 24.

"I'm really excited. The girls are buying in to what I'm teaching them as a far as a culture piece and what we're doing systematically," Flores-Cloud said. "There's been a good merging of competitiveness on the floor and figuring out who we all are off the court. It's been a great preseason so far, but I'm excited for us to get on the road and start playing someone else."

Flores-Cloud became the eighth head coach in Eastern Washington volleyball history on June 15, 2018. She brought on assistant coach Kelly Bonja and hit the recruiting trail hard, bringing in three new transfers to a class of five returners and seven freshmen who committed in fall of 2017.

The relatively young group will look to return to the Big Sky Conference Tournament for the first time since 2016 after finishing 7-18 overall with a record of 4-12 in Big Sky play.

"It's going to be a challenge to unite everyone because we have 11 newcomers and five returners," Flores-Cloud said. "It's going to be a process of learning about each other and figuring out our intricacies and how to mesh and become a unit. Preseason has been a great time to have together."

In all, the Eagles lost eight players from last year's roster but return three starters and reloaded the talent with 11 newcomers.

Both Davis and Espinosa's seasons were cut short due to injury, but Espinosa managed 1.84 kills per set in the 50 sets she appeared in. Espinosa garnered three double-doubles last season while Linke had two and Davis had one.

The Eagles play their entire nonconference schedule on the road, but open conference play Tuesday, Sept. 18 at home against the University of Idaho.