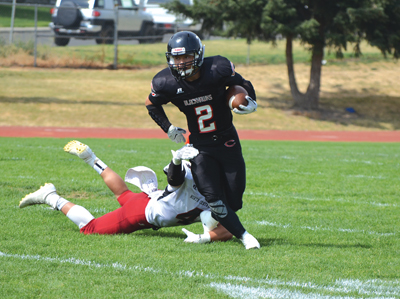 Senior running back Charles Johnson was all over the field for the Cheney Blackhawks versus North Central.

Due to the smoke filled air, the Cheney High School football team's game was delayed by one day and took place last Saturday afternoon against Greater Spokane League's North Central where the Blackhawks rallied from behind but eventually fell 33-27.

"As far as effort, the boys did great," head coach Bobby Byrd said. "It was a wacky situation with it being a mid-day rescheduled game, but it came down to the team with less mistakes and North Central did a great job at that."

The start of the game was not in Cheney's favor as they fumbled the ball on their first possession which led to the In...