By STAFF AND NEWS SERVICES REPORTS 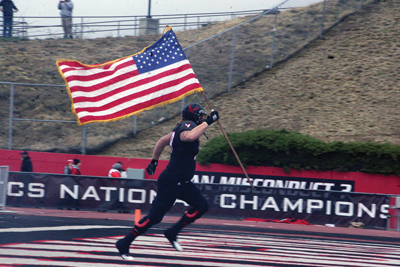 EWU's Cassidy Curtis led his team onto the field in last Saturday's Big Sky Conference game against Weber State. The Eagles got a pair of touchdowns from Cooper Kupp and watched as the Wildcats missed three field goals to earn a 14-13 victory.

The fourth-ranked Eastern Washington University football team seeks to extend its six-game winning streak when the Eagles play their 89th annual Homecoming game this Saturday in an intriguing Big Sky Conference contest versus Northern Arizona at Roos Field. Kickoff is set for 3:05 p.m.

Eastern sits atop the Big Sky Conference at 5-0, has won 22 of its last 23 league games, and has been victorious in 19-straight regular season home games. The only conference loss in the last 27 games for the Eagles against Big Sky opposition (including four out of conference games) was a disappointing, last-minute 28-27 setback to NAU last season in Flagstaff.

But oddly enough, the Lumberjacks enter Saturday as the hotter team, scoring 115 points in victories over Weber State (52-36) and Northern Colorado (63-21). Their combined winning margin of 58 points against those two teams - both at home -is rather impressive considering EWU beat the same two foes the last two weeks by a margin of only three points (43-41 over the Bears and 14-13 over Weber State).

"They'll be coming in with a ton of confidence," Eastern head coach Beau Baldwin said. "I said last week that Weber State had the best defense we've played against to this point, and now I'll say, outside of maybe Oregon, that NAU has the best offense we will have faced."

In that win over Weber State last Saturday, played in buffeting winds that reached over 30 miles-per-hour, the Eagles made two Jordan West-to-Cooper Kupp passing touchdowns hold up for the victory.

The normally offensive-minded Eagles were grounded by the wind and relied on a defense that played nearly 42 of the game's 60 minutes.

Junior linebacker Miquiyah Zamora led the way for the Eagle defense with a career-high 16 tackles and senior rover Todd Raynes had 13. Eastern had three sacks, including 1 1/2 by junior defensive end Samson Ebukam.

Adding further incentive, Northern Arizona is playing for its postseason life, entering Saturday's game with a 5-3 overall mark and a 3-2 conference record. The Lumberjacks have lost on the road at Arizona, Montana and UC Davis, but did pick-up a season-opening road win at Stephen F. Austin.

Some of the top offensive players in all of the NCAA Football Championship Subdivision will square off this week. Lumberjack freshman quarterback Case Cookus leads FCS in efficiency rating (197.4), completing 70 percent of his passes for 26 touchdowns, 2,130 yards and just three interceptions.

"They have all the pieces - they have a running game that is very effective, receivers that are good as a whole and one who is off-the-charts, and the quarterback is doing as well as anyone in the country if you look at his numbers," Baldwin said.

TV: TV: Live regionally on SWX (Sam Adams/Bill Ames). Webcast: http://www.watchbigsky.com.Radio: 700-AM ESPN in Spokane. Larry Weir returns for his 25th season calling the play-by-play, with analysis handled by Paul Sorenson. Broadcasts begin one hour prior to kickoff and include an expanded post-game show.