By FROM NEWS SERVICE AND STAFF REPORTS

Former Eagle is headed for the NBA after he's picked 51st 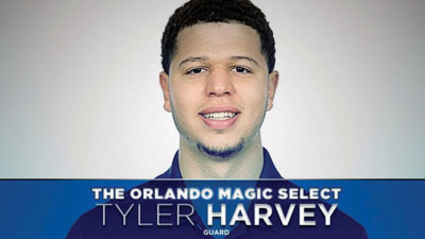 After performing his magic act at Reese Court in the past three seasons, the transition from Eagle to a member of the Orlando Magic has begun for former Eastern Washington University men's basketball player Tyler Harvey.

The former Eagle sharpshooter was selected by Orlando in the second round as the 51st pick overall of the National Basketball Association Draft June 25 in Brooklyn, N.Y. He elected to skip his senior season at Eastern for the chance to play in the NBA, and it appears his gamble has paid off by becoming just the third Eagle in school history to be drafted.