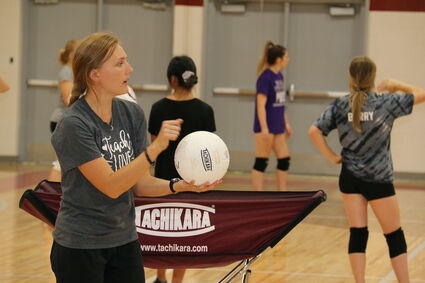 Hailey Van Soest answered the call last season when needed in a pinch and that was later rewarded with her being named as head volleyball coach at Medical Lake High School.

Now it’s her ship to captain with a bold vision in mind for the future. It’s Van Soest’s goal to build a program that can someday soon have a banner on the Cardinals’ gym wall that honors the many different champions from the past.

Van Soest went to school at Cheney High where she naturally played volleyball for both the Blackhawks and club teams as Hailey Bridges until marrying Zach Van Soest. She would attend and graduate from Eastern Washington University, starting that quest early as a Running Start student.

She’s put the Ed degree to work as a kindergarten teacher at Hallett Elementary as her “day job” and now moonlights in volleyball on a fast track as a head coach.

Van Soest was working as ML’s C-Squad coach last season when then head coach Darci Mock stepped aside as the season wound down. “They really did a great job especially with me having to jump in,” Van Soest said of her team.

“They asked me to step in for that last month,” Van Soest said. When the job opened Van Soest applied, “And here I am, I’m head varsity (coach).”

As the C-Squad coach Van Soest was still as close to varsity as possible. She sat on the bench and did statistics, among other things. The temporary transition was largely seamless in the Cardinals’ 7-5 third-place finish in the Northeast A League and 8-8 overall last season.

Along with the challenges of being elevated to varsity, Van Soest faces the task of filling out a lineup that lost seven seniors to graduation.

However, there is some experience in players like senior Rylie Spring who has played all four years according to Van Soest. Spring’s younger sister, Madi, is a sophomore. “She set for us a little bit last year on varsity,” Van Soest said.

Van Soest refers to senior Marin McKee as the “This mother bird to the team” who helps keep all the girls together and has a level head, “And is a good player too,” Van Soest adds.

Senior Ailahni Viloriam split time last year at libero. Tessa Appel was a swing player in 2021, splitting time on both varsity and JV, as did Chiche Okemgbo. “Those are the names that are kind of sticking out right now and I’m keeping an eye on,” Van Soest said.

Medical Lake will unveil its squad Saturday, Sept. 3 at the Davenport Tournament with play beginning at 9 a.m. The home opener follows Tuesday, Sept. 6 with a non-league match against Chewelah. The Cardinals open NEA play Sept. 8 at Newport.