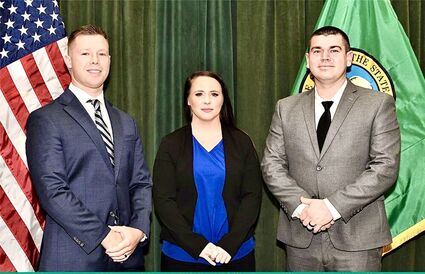 He grew up in Spokane Valley and graduated from West Valley High School in 2014.

He was previously employed with Spokane County Detention Services and has served in the Washington Army National Guard since 2019.

Whitman, 29, grew up on a family farm in Whitman County and attended Pullman High School.  She graduated from Eastern Washington University in 2015 and is a certified recreational therapist.

Grady, 26, was born in Fresno, Calif. He moved to Olympia in 2018 to begin his law enforcement career with the Washington State Patrol.

After graduating from the patrol's Basic Academy, he served in the Ellensburg detachment before accepting the lateral position here..

The Sheriff's Office has been offering a $25,000 sign-on bonus as encouragement for law enforcement officers to move laterally to Spokane County enforcement.

The agency is also offering a $10,000 bonus to new deputies.