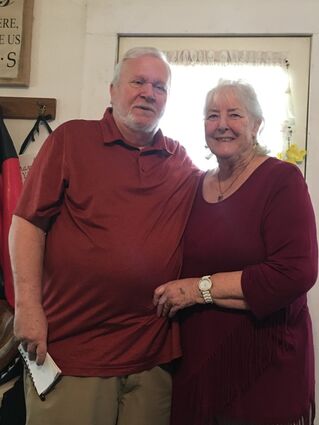 SPRAGUE – A local couple will share honors as the 2022 Sprague Days grand marshals.

Dick and Claudette Sharp were selected to lead the Sept. 10 town celebration, which includes a parade, Renegade Restorations' car and bike show, a beer garden and more.

The fun will last all day, organizers said, noting there is also a back sale, vendors in the park, family activities planned by Future Farmers of America students, a 3 p.m. raffle and music by The Old Dogs of Ritzville from 11:30 a.m. to 2 p.m. and 4-7pm.

The Sprague Railroad Depot Museum will also be open from noon to 3 p.m.

The parade is set for 11 a.m. and runs along First Street from F Street to C Street, then around the city park.

On Sunday, Sept. 11, Church in the Park hosted by St. John Lutheran Church is at 9a.m. and breakfast will be served at the Community Hall by the Little League from 8 a.m. until noon.

The Sharps will preside over the festivities.

Dick Sharp was born and raised in Sprague; he graduated from Sprague High School in 1967.

He worked for the Sprague Advocate and later was hired by a newspaper in the Tri-Cities, where he moved to for a year, before returning to work for John Deere dealers in Spokane, Cheney and Sprague.

He also worked for several area farmers prior to starting full-time at Sprague Grange Supply until his heart forced him to leave full-time employment.

Claudette moved to Sprague with two of her four children in 1986, to be nearer her twin sister, Claudia Lowman.

Her first employment here was at Stan's Drive-In with Mary Ford, and then she went to do housekeeping and laundry at senior homes in Ritzville and later Spokane.

When Dick Sharp's dad's (Bob) health deteriorated, they took over providing his full-time care and Claudette left her job to care for him, and then Dick when he began having heart problems.

As life went on, they took turns caring for each other during health issues. She said she didn't know much about Sprague, so she felt that the best way to meet people was to volunteer.Dick was raised by parents who were actively involved in Sprague Chamber and the community as a whole. He volunteered on the Fire Deptartment and as an EMT, served on the City Council and 18 years at Turkey Bingo.

He designed the 'Sprague Harvest Hoof-it' T-shirts and worked at the race turn-around out by Sprague Lake. He met Claudette in 1990 and she began joining him in volunteering at Turkey bingo, serving as chamber officers, putting up and taking down Veteran flags at McAbee Cemetery each Memorial Day Weekend.

Dick started volunteering as Santa's elf to help give children goody bags and get pictures and later was 'promoted' to Santa and Claudette became Mrs. Claus. They noted that several of the younger children would be intimidated by Santa's big beard and "Ho Ho Ho."

They would go up to Mrs. Claus. So instead of assisting, she got her own chair next to Santa for the last few years.

Dick also designed and painted sets for the high school plays and as his romance grew with Claudette, she would join him up there helping.

They also both help with the Easter egg hunt, including Claudette serving as the "Easter Bunny" for a few years originally at the school, but now still buying eggs and stuffing them with candy and money for the little ones. They have also volunteered for the food bank and donated food to the Christmas Food and Gift Program.

Claudette started the Red Hat Ladies in Sprague, and a couple's Pinochle Club, which played for many years until many of the members began to have health issues, moved closer to doctors or died.

She tried to resurrect a Ladies' Pinochle Club a few years ago and it was very popular until COVID-19 hit. Some members still try to get together and play after senior meals now.

Dick has also been a member of a band of 5-6 members, four of which are Sprague High School graduates. Known as "The Rusty Vikings," they will be playing at the Lincoln County Fair again this year.

Dick and Claudette could often be identified as the couple walking up and down the streets of Sprague holding hands.

This romance kindled into marriage, which as of this October they will have been wed for 30 years.