Bene's takes home the gold in Battle of the Burgers 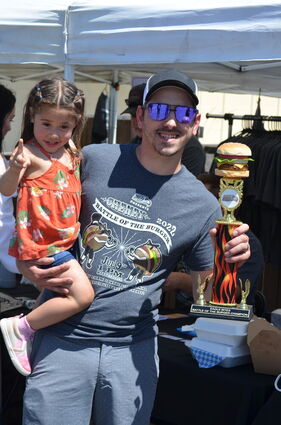 Owner of Bene's, Derek Baziotis, posing with his trophy after being announced the winner of the inaugural Battle of the Burgers competition.

CHENEY- Cheneyites had one week to visit six participating local eateries and decide which one would get the bragging rights and a trophy for "best burger in town."

On Saturday afternoon, Bene's took home the winning title with Yoke's and Lenny's right on their tail, placing second and third.

Operations Director of Bene's Sabrina Anderson said there was a 10–point difference between votes for their Elote Burger, Yokes' Bold #20 Burger and Lenny's Bootleg Stromboli Burger.