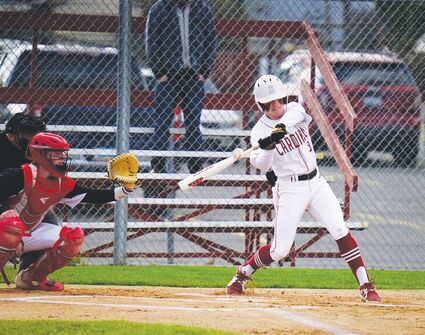 Shortstop Kaleb Cain (3) swings hard at a pitch during the April 26 outing against Newport. Cain is the number one batter in the lineup for a reason, and is a highly efficient baserunner and scorer once he gets on base.

MEDICAL LAKE – Playoff baseball starts on May 7 for the Cardinal baseball team after they finished the regular season on a seven-game winning streak. Over the past week, they have dismantled Newport, Freeman, and Riverside putting Medical Lake at 16-4 on the season.

April 26 brought the Newport Grizzlies to town. The Cardinals started off a bit slow, but scored eight in the fifth inning after figuring the pitcher out according to Head Coach Austin Sharp. The scoring burst gave them the win over Newport 12-2.

"They got a pretty solid pitcher, and they probably have one of the better guys i...