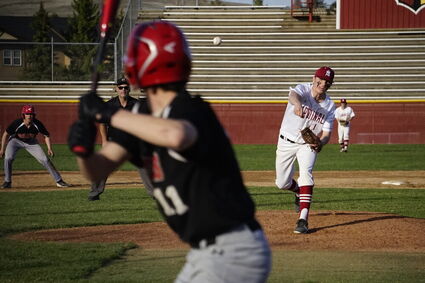 Eugene Haas releases a pitch during the game against the Newport Grizzlies on March 29. Haas came in and closed the final inning with one strikeout to his name.

MEDICAL LAKE – The Medical Lake baseball team had a busy week swinging bats as they overwhelmed the Newport Grizzlies 11-1 on March 29 and dismantled the Liberty Lancers 15-1 on March 31.

The Cardinals hitters created early offense against Newport, scoring six runs in the first two innings. Andrew Roberts led the attack with a two-strike bases-loaded double to deep center field in the bottom of the second, bringing home Jalijah Meacham, Luke Dickey and Kaleb Cain. Andrews finished with four RBI in the game.

"The guys were motivated to win, and our defense made the plays that needed to be...