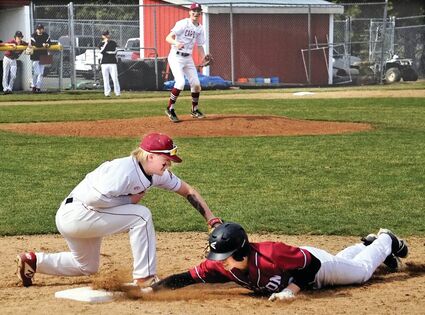 Eugene Haas spins and throws the ball to Joe Griffey for the pick off at first base.

MEDICAL LAKE – The Cardinals dominated both games of a double-header against Rogers High School on March 22. Medical Lake took game one by a score of 11-1, and then shut out the Pirates 10-0 in game two.

Luke Dickey got the win for the Cardinals, striking out nine batters in just over five innings pitched. Dickey threw 88 pitches allowing one run and two walks in the game. According to Coach Austin Sharp, sticking to the game plan allowed the team to dominate both games without too much trouble.

"We wanted to work on some bunting- some small ball stuff," Sharp said. "I had a plan where...