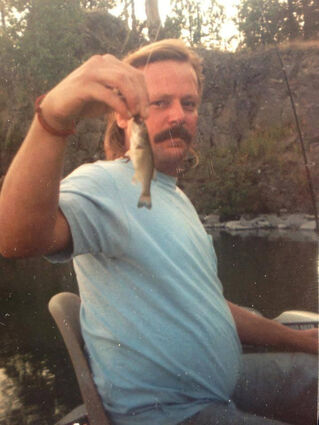 A star in the Heaven's became twice as bright as a soul left his place on Earth and ascended upwards to finally be reunited with the love of his life. That star brightened on February 18, 2022, when Phil Odum entered into rest in his little humble homestead just south of Cheney, Wash.

On November 29, 1952, Phil was born in Tennessee to Leroy and Gladys Odum. His father was in the military, giving Phil the opportunity to live in various places that he enjoyed as a young child. Catching crabs off the piers in Florida and beholding the beauty of Alaska was a couple of his favorite memories from childhood. As a child who was a bit of a daredevil, he enjoyed being a little reckless. One story of such he liked to tell was of how he and his friends would climb to the top of pine trees and dangle by the top to see who the last one to fall would be. Needless to say....he received a lot of stitches as a child! So much so, he quit telling his mom and simply stitched himself up.

Later, after his family settled in the West Plains area, he attended Cheney High School where in 1970, he would meet the love of his life, Karen. To him, she was his "Spanky" and to her, he was her "Pooh Bear".  In 1972, they married one another and had two children, Ben and Chris.

Being enthusiasts of Mother Nature, Phil and Karen moved their little family to live a simple life on Chapman Lake. There, Phil enjoyed taking his family hunting and fishing. Many nights, Phil would spend time on the lake alone with Karen as they fished together under the stars.

Eventually, they bought a small plot of land near Turnbull where Phil created a humble little abode to live in solitude with his love. Together, they created a life with little distractions from society. His only sadness living there was when the love of his life was sent to the Heaven's as a Valentines gift in 2011. From that point on until his own ascension upwards, his love for Karen never diminished and waited for the day they would be reunited. Until that day came though, Mother Nature made sure he had "little friends" to keep him company. Being the "Animal Whisperer", he befriended the squirrels in his roof, the cottontails in the field, and the hummingbirds in the air by often feeding them by hand. Once, he even met a group of hungry coyote pups that ran to him without fear or hesitation when he brought some food for them.

Preceding Phil in death are his parents, Leroy and Gladys. Surviving him are his sons, Ben and Chris, brothers Wayne and Jack, numerous nieces and his granddaughter, Abigail whom he is now watching over with adoration. Additionally, he leaves behind numerous caring friends that he was deeply appreciative for having....he loved you all. For everyone, here is a quote that Phil posted on his social media last fall. "Many people have passed away early - When we look at the sky, we love the idea that they look back at us. We remember them often, at night, when  we look at the stars ... a date ... a song ... a place ... a smell ... A  memory of those who left us ... always loved, deeply missed".

As deeply as we all shall miss Phil, keep in your hearts his memory and rejoice in knowing that "Pooh Bear" and "Spanky" are now together once again and are looking down upon us all with love.

Per Phil's request, no formal ceremony will be held. Instead, he would like to ask everyone to hold their own personal service and remember him in each of their hearts. "If there ever comes a day when we can't be together, keep me in your heart.  I'll stay there forever"-Winnie the Pooh