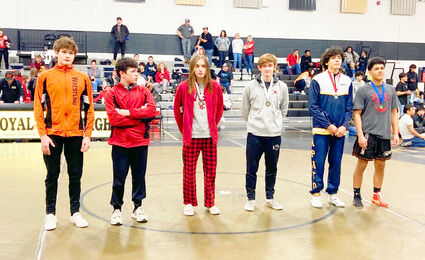 Aden Carl (third from right) placed third in the 2022 1A Region 1 Wrestling Tournament at Royal High School to advance to the state tournament in Tacoma.

Arden placed third in the 132-pound weight class. He lost his first match of the season, 8-3, to Carl Kayden Cate from Omak but bounced back strong pinning his next two opponents. The win put Arden in a rematch with Cate, needing another "W" to move on to the Dome.

"Aden completed his tournament by reversing his initial loss to Kayden Cate of Omak, beating him in a grinding 2-1 match," Assistant coach Tory Carl said. "The victory over Cate earned Carl his 3rd place medal and qualified him to participate in his 3rd WIAA State Wrestling Tournament."

Raulston placed fifth in the 113-pound class. He pinned Royal's Issac Torro and Damian Sandoval of Cascade (Leavenworth) in his first two matches. Raulston lost his next two matches to Luis Barajas of Wapato and Jaime Alejandre of Zillah and then pinned his next opponent to stay alive.

"Raulston placed 5th showing great resilience by overcoming two losses by fall in the middle of his tournament," Carl said. "Bouncing back with a pin of Brock Berger of Deer Park, he secured his 5th place medal and qualification to the state tournament as a freshman."

Roberts dropped three of five matches to place 7th in the 170-pound class.

True Cole also placed 7th in his respective 195-pound class and will advance as an alternate if needed. Cole pinned Ismael Custodio of Wapato and then lost his next match to Joshua Luna of Toppenish. He beat Royal's Noel Alatorre with a 5-2 decision and lost again by pin to Xavier Cardona of Omak. Cole pinned Jonathon Martinez of Zillah in his final match.