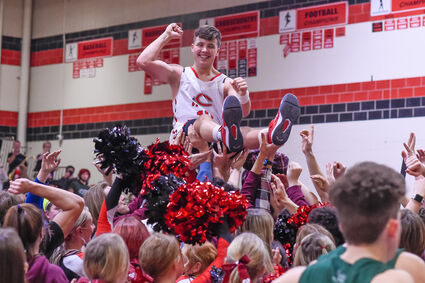 Senior Paul Carpenter is given the ride of his life by his appreciative classmates following the Blackhawks season ending 77-63 victory over Ridgeview.

CHENEY - How do you go from being a senior cut from the Blackhawks basketball team to the most celebrated player on "Senior Night?" Paul Carpenter found out!

When the team held tryouts last November, Paul's name wasn't on the list of those who made it. Paul, not real tall and a little short on shooting ability, was heartbroken but desperately wanted to join the group.

He was "hired" as the Volunteer Student Coach Manager (VSCM). If there was something to be done Paul, did it.

"Paul is the hardest worker we know," said fellow seniors Garrett Heuett and Josh Whitely. "We're proud of him for s...