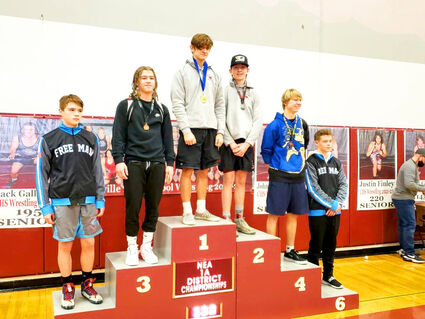 Aden Carl (No.1) and Tanner Sellers (No.2) won gold and silver for Medical Lake in the 132-pound weight class during the Northeast A League District Championship held in Colville on Feb. 4-5.

COLVILLE – Medical Lake senior Aden Carl scored 28 team points to claim the Northeast A League Championship in the 132-pound class at the district tournament on Feb. 4-5.

Three other Cardinal wrestlers finished second in their respective weight classes including Tanner Sellers who placed second to Carl and scored 21.5 points for Medical Lake.

Carl received a bye for his first match and then pinned Giovanni Gaynor from Colville in his second match. In the semi-finals, he pinned Riversi...