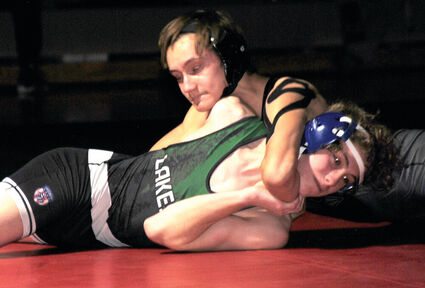 Aden Carl works for the pin on Lakeside's Will Clark by trying to maneuver Clark onto his back.

NEWPORT – The Medical Lake wrestling team traveled to Newport to square off against the Grizzlies on January 27, and the Cardinals came home with the victory with the final match score being 48-18.

Gavin Chaffee got things rolling for Medical Lake as he won the first match by pinfall in the 285-pound class against Roman Tannehill from Newport.

The next match at 106 pounds was a double forfeit, and Hudson Raulston from Medical Lake pinned Newport's Michael Nelson at 113 pounds to follow that up.

The 120-pound match was also a double forfeit, and then Isaac Kane won by forfeit at 126 pound...