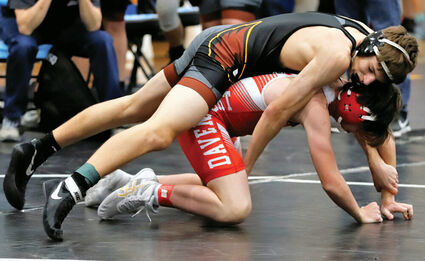 Medical Lake's Austin Armstrong sits out on Jenkins Clayton Jeanneret during a bout at 170 pounds.

In the 132 class, Medical Lake's Aden Carl went undefeated winning five matches and taking first place individually, and four of his wins were by pin.

Carl had wins by pin over Demzel Ekholm from Mead, Nicholas Carlson out of Chewelah, Hunter Hawk from Freeman High School, Owen Zitek from East Valley, and a decision win over Owen Prince from Liberty (Spangle).

Carl wasn't the only Cardinal to have...