Eastern advances to second round of playoffs 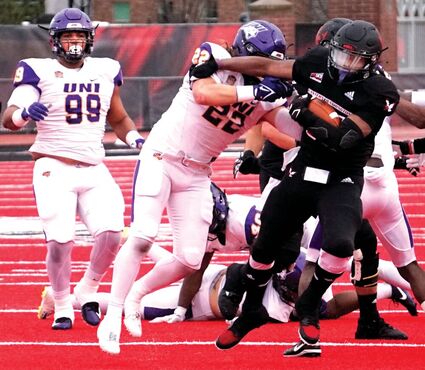 Running Back Tamarick Pierce fights off Panther linebacker Bryce Flater and powers forward for a gain of 30 yards in the second quarter.

CHENEY – Nearly 4,000 fans braved the rain and attended the first-round, Nov. 27 playoff game at Roos Field, where the Eastern Washington Eagles beat the Northern Iowa Panthers 19-9 in a hard-fought contest.

Both teams battled back-and-forth early in the game as penalties and key defensive stops prevented scores on both sides of the ball.

Receiving the ball initially, the Eagles first drive faltered after gaining just 17 yards and Nick Kokich punted the ball down to the Northern Iowa 5-yard line.

The Panthers would have gone three-and-out; however a costly defensive pass interference pl...