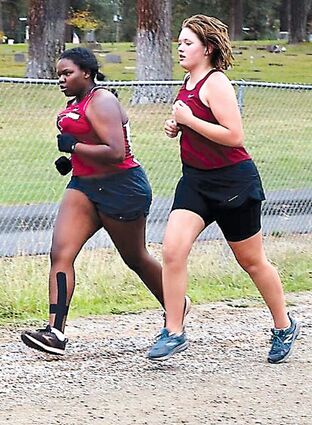 “In my opinion,n they have the most interesting course in the league, with two laps around a cemetery,” Cardinals Coach Gene Blankenship said,“This course is also the most difficult league course we have run, so far.”

The varsity girls team, led by Kayla Ramsey finishing with a time of 21:14, took the Top 8 positions for a perfect 15-50 score.

Jenna Castro finished in second place at 21:52, followed by Allison Payne in third.

Jasmine Cruz finished fourth with a time of 23:16, and Kylie Roberts, Katie Hiatt, and Grace Grubaugh finished out the top spots for Medical Lake..

The boys varsity team also prevailed by a score of 19-36.

Cardinal boys were led by Reid Headrick, who was followed by Connor Palmen.

The Medical Lake junior varsity runners won both the boys and girls races with scores of 15-50.

“On the boys side, there was a mixup in the finish order,” the coach said. “Our freshman, Nakai Ornales was given the credit for winning the junior varsity race, when he should have been entered in varsity.”

The next event will be the last home meet for the Cardinals this season.

Medical Lake was scheduled to run against Deer Park and Colville on Wednesday, Oct. 20.

“This meet will determine the first-place team in the boys varsity, girls varsity and the girls junior varsity,” the coach said. “The boys junior varsity title has been won by Lakeside.”

The Cheney Free Press went to press before the meet started.