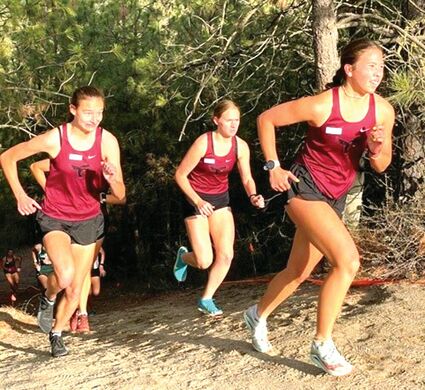 Grace Grubaugh, from left, Kayla Ramsey, and Jenna Castro run as a group for Medical Lake. The Cardinal girls defeated both Lakeside (Nine Mile Falls) and Riverside (Chattaroy) in the varsity race.

SPOKANE – The Medical Lake cross country boys and girls teams ran to victory over Lakeside (Nine Mile Falls) and Riverside (Chattaroy) in the first league meet of the season for the Cardinals.

"Our boys defeated Lakeside, 26-29," Coach Gene Blankenship said. "But to be fair, Lakeside was missing two of their Top 5 five runners.

He said the Cardinal boys varsity boys team also defeated Riverside, 25-31, although the overall winner in the boys race was Jamal Distel of Riverside, who finished with a fast time of 15:41.

Medical Lake's Reid Headrick was second, blazing through the track in 1...