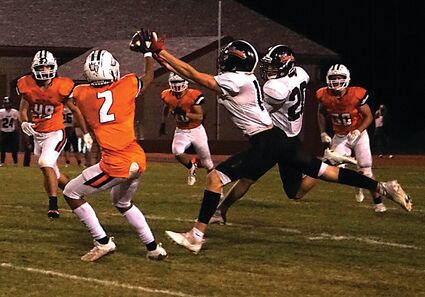 Cheney tried to get some offensive momentum, but the West Valley defense held them scoreless.

MILLWOOD – The Cheney Blackhawks varsity football team lost their away game against the West Valley Eagles, 17-0, of Friday, Sept. 24.

Craig Whitney is in his 17th season as West Valley head coach,

Cheney Head Coach Bobby Byrd is still trying to find a fix for his team.

"We prepared well, but West Valley just came out and battled their tails off. Coach Whitney always has these guys ready to go and the unfortunate part is that we fell short."

The Blackhawks failed to capitalize on a fumble recovered by Cheney junior Owen Scott early in the game.

West valley quarterback Tom Price got the Eagles on the board first.

With 8:24 left in the second quarter the Eagles scored and made the extra point, to lead 7-0.

Later in the quarter, West Valley recovered the ball off a tipped Cheney pass only to have the Blackhawks intercept shortly thereafter.

At halftime, West Valley was still up 7-0.

In the second half Grady Walker snagged a 35-yard pass for West Valley bringing the Eagles within striking distance of the goal line.

They picked up a field goal making it 10 - 0 with a little over 5 minutes left in the third quarter.

Cheney hoped to put some points on the board with 2:49 left in the quarter when Konnor Dobosh recovered a West Valley fumble.

But the Blackhawks couldn't capitalize as the Eagles' Grady Walker intercepted a Cheney pass.

At the start of the fourth quarter, West Valley still led, 10-0. The Eagles would score another touchdown and extra point to bring the game to 17-0.

Cheney's Josh Bingham intercepted a West Valley pass with 7:14 left in the quarter, but the Blackhawks again failed to do anything with it. West Valley went on to win the game with a final score of 17-0.

Cheney (0-4) hasn't won a game yet this season with devastating losses to Mount Spokane, University and Gonzaga Prep.

"Throughout the game you could see that we are so darn close but West Valley our hats are off to them, they battled their butts off and got the job done," he said.

West Valley (2-1) beat Newport in their first outing of the year but fell badly to the Lakeland Hawks in Rathdrum.

Coach Whitney knows the Eagles still have work to do.

"Most of these kids were JV kids last year and they only got two games in the spring," he said. "We made a lot of mistakes, cause they don't have a lot of experience,

"We've got to work really hard as coaches to bring them along."

This Friday, Oct. 1, West Valley will be on the road against the Pullman Greyhounds.

Whitney thinks the win over Cheney will stick with his team for a while,

"Really happy for the kids that they got to play for their home fans and produce a win," he said. "I love Cheney. Love their coaches. It was a good battle. Just happy to be out here playing."

Cheney's Coach Byrd commended the Eagles on their win,

"Throughout the game, you could see that we were so darn close," he said. "West Valley, our hats are off to them, They battled their butts off and got the job done."

The Blackhawks will also see action this Friday at home, as they host the Mead Panthers. Kickoff is at 7 p.m.