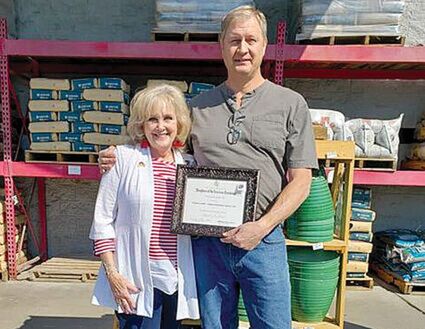 National Society of the Daughters of the American Revolution Esther Reed Chapter Regent Mary Gilmore poses with Tom Jarms of Jarms Hardware in Cheney after presenting him with the Community Service Award.

CHENEY – Two local businessmen have been honored for their community service work.

Tom Jarms of Jarms Hardware and Dennis Williams of System Transport were presented awards for community service last week by the Spokane Chapter of the Daughters of the American Revolution.

"A year later, Jarms Hardware continues to support efforts by local residents to rebuild their towns," the award announcement said.

System Transport CEO Dennis Williams was recognized for transporting the Capital Christmas tree from California to Washington D.C., for the upcoming holiday season.

The company was selected at the recommendation of U.S. Capitol Tree program sponsor Kenworth Truck Co., based on System Transport's strong reputation across the West Coast. Throughout years of operation, they have accumulated many service awards, including the Goodyear Highway Hero, Great West Safety Award, Carrier of the Year and Lowe's Platinum Carrier.

"As a second-generation family-owned and operated company, Christmas is a special time of year for us," Dennis said. "We are proud to be a part of the annual tradition that brings the Christmas spirit to our nation's capital and to all the families who gather around their own trees to share the spirit of the season."

Mary Gilmore, the Regent for the Esther Reed Chapter congratulated the men.

"Both Mr. Jarms and Mr. Williams are excellent representatives of the spirit of community pride and service to America encouraged by NSDAR," she said.

Scott Davis can be reached at news@cheneyfreepress.com.