Taking in the experience 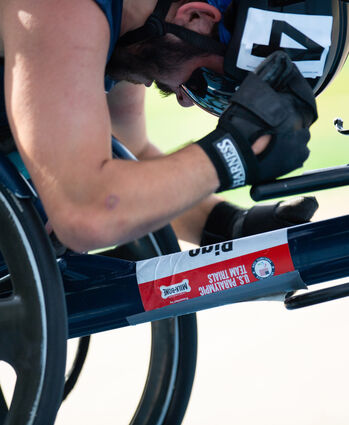 Cheney's Isaiah Rigo focuses on his racing technique during Paralympic time trials June 19 in Minneapolis. The four-time 2A state champion and former Blackhawk will compete for Team USA at the 2020 Paralympic Games in Tokyo, Aug. 24 – Sept. 5.

"I get excited, nervous to serious, then back again," the Cheney High School state cross country wheelchair champion said in a July 26 interview.

Rigo, who attends the University of Illinois and competes in NCAA wheelchair track and field under head coach and Paralympian Adam Bleakney, was named to Team USA after track and field trials June 17 – 20 in Minneapolis, Minn. It's the former Blackhawk's first Paralympics, and he joins 65 track and field athletes on the 240-member Team USA at the 2020 Games, which like the Games for ambulatory athletes, was delayed one year by the Covid-19 pandemic.

"At its core, the Paralympic Games represent inclusivity and the infinite possibility of sport," U.S. Olympic and Paralympic Committee CEO Sarah Hirshland said. "This group of athletes represents Team USA at their best. They are strong, resilient and ready to make you proud."

Knowingly or not, Rigo's road to Tokyo began at age 6 with ParaSport Spokane. Born with a rare congenital disorder known as arthrogryposis, Rigo said he attended a nationals competition at the Spokane Falls Community College track and field complex and was noticed by long-time coach and current executive director Teresa Skinner.

Rigo also competed in wheelchair basketball, being part of a St. Luke's Tornadoes team winning a national championship in 2012. He has competed in the World Championships in track in 2013 in Lyon, France; in 2015 in Doha, Qatar and in 2019 in Dubai where he had his highest finish yet, fifth in the 400-meters and 1,500-meter races.

"He is a once-in-a-lifetime athlete and I am excited to see how he does on the world stage," Cheney High School cross country and track and field head coach Derek Slaughter said when hearing of Rigo's selection to Team USA in June.

Rigo said he focused more on track during high school to win a scholarship, which he did, heading to Illinois to compete for Bleakney, a Team USA competitor at the 2004 Games in Athens, Greece and 2008 Games in Beijing, China, winning a silver medal in the 800 at Athens.

Rigo's focus on racing is even more impressive given his disability. According to Johns Hopkins University Medicine, "Arthrogryposis, also called arthrogryposis multiplex congenita (AMC), is a term used to describe a variety of conditions involving multiple joint contractures (or stiffness). A contracture is a condition where the range of motion of a joint is limited. It may be unable to fully or partially extend or bend."

Rigo's disability occurred in utero, likely from lack of movement while he was in the womb, he said. It affects not only his legs, but also his shoulders, hands and elbows - parts of the body critical to wheelchair racing.

"That's why you train," Rigo said. "That's why I've been competing at the elite level since I was 14. You definitely want to take care of your body."

Rigo had a week off after the trials to return to his parents ranch on Hallett Road between Snowdon and Windsor elementary schools. After that, it was back to Champaign to train in temperatures soaring well into the 90s and humidity that wasn't far behind - conditions mimicking what athletes will likely find in Tokyo.

Rigo will compete in the 100, 400 and 1,500 in Japan, setting season bests in the first and the latter of 18.16 seconds and 3 minutes, 59 seconds. Up until recently, the workouts in Champaign have been "high intensity," focusing on conditioning rather than racing.

"That will calm down for a week, but ramp back up the closer we get to Tokyo," he said. "I'll also begin to focus on tactical (elements of racing)."

While the 400 is a favorite, Rigo said he has set goals and plans for all three. The 100 and 400 are about going as fast as you can, and Rigo said he is focusing on trying to get good starts in both. He expects to finish no lower than fourth in the 400 while hoping to just make the final and finish as high as possible in the 100.

Rigo plans to be more "ambitious" in the 1,500, an event he is ranked fifth in the world for his category, T52. He has raced against and defeated the third and fourth ranked athletes, and has devised several plans for the race - which relies on tactics as well as endurance.

"Pay attention, take it easy, think what others might do and try to control your race," he said. "Ultimately, you're not going to be able to tell other people to slow down or go faster. It's about what are you going to do at that moment." 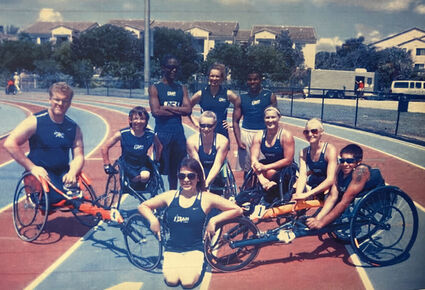 Isaiah Rigo prepares to compete in a race at the U.S. Paralympic Team time trials in Minneapolis.

As they were with the recently completed Games, Covid-19 restrictions will limit Paralympic athletes ability to take in the sights, sounds and smells of Japan outside the Olympic Village. While disappointing, Rigo said he wants to absorb the experience of competing against the best athletes in the world.

In that regard, he takes a bit of Cheney with him - advice from former coaches such as Slaughter about having fun and doing the best one can. It's advice he adheres to even at Illinois when his perfectionist and competitive natures rear their collective heads.

NBCUniversal will provid over 200 hours of coverage of the 2020 Paralympic Games on NBC, NBCSN and the Olympic Channel, beginning with opening ceremonies Aug. 24. Track and field competition begins Friday, Aug. 27.