By From Staff and News Service Reports
Cheney Free Press 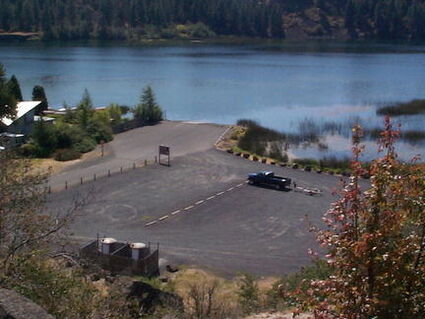 Department of Fish and Wildlife | Special to the Cheney Free Press

The Williams Lake public access area (above) will be closed beginning Aug. 8 for installation of two new boat ramps along with improvements to the parking area.

CHENEY - Water recreation enthusiasts will find their access to Williams Lake limited beginning this week. The state Department of Fish and Wildlife is beginning a project to replace the existing ramps at the public water access are on the lake, located south of Klink's Resort.

In a news release, DFW officials said the work was beginning now due to a limited construction season. Contractor crews will be onsite preparing the area for construction, which will require full closure of the access area beginning Aug. 8.

The $647,000 project includes removing the existing damaged boat ramp and replacing it with a new precast concrete plank ramp. The gravel ramp next to it will also be upgraded to a similar style ramp to accommodate more users.

A boarding float will be added between the two ramps, along with improvements to the parking are such as paving, adding ADA parking spaces and replacing the existing toilets with a prefabricated ADA-accessible structure. 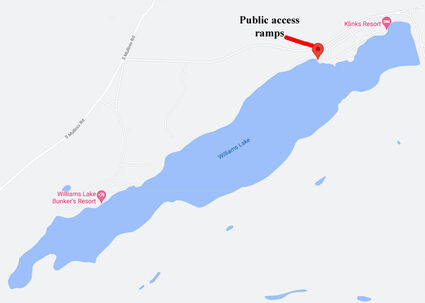 Department of Fish and Wildlife | Special to the Cheney Free Press

Members of the public can still access boating on Williams Lake via the launch are at Bunker's Resort.

"This work will make this access area much easier to use or boaters and more accessible to people with disabilities," DFW area manager Dan Dziekan said in the release. "It's a full overhaul, so unfortunately the construction process requires some inconvenience and a temporary closure for members of the public."

While the access area is closed the public will be allowed to launch boats at Bunker's Resort on the southwest corner of the lake. The ability comes with a fee and is on a limited basis, so prospective users should call 509-235-5212 to ensure the water level is sufficient for launching and room is available to park a vehicle and trailer.

The Washington State Recreation Office is funding the project through a Boating Facilities Program grant. Construction is slated to last through the end of fishing season, Sept. 30.

"We're asking people to bear with it though because in the end they'll be able to enjoy a much nicer boating experience," Dziekan added.