Thousands turn out for Freedom Rodeo 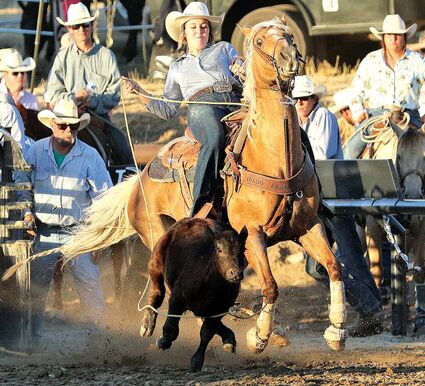 BASIN CITY — Thousands of rodeo fans turned out Friday and Saturday, June 25 and 26, to watch the second Freedom Rodeo.

Temperatures neared 100 degrees at performance time Friday night and topped 105 at the start of Saturday’s rodeo.

To keep cool, several fans put on canopies on the rim of the arena, while at least one family brought a toddler wading pool and filled it with water.

The event got underway Friday morning with slack competition and a vendor area, compete with giant turkey legs, elephant ears and, of course, shaved ice.

In addition to regular events, the Freedom Rodeo had a large field of young competitors in mutton bustin’, calf riding, a calf scramble and a chicken scramble. Adults also took to the arena for two rounds of wild cow milking each night.

Competitors came from across the Pacific Northwest, as well as from as far away as Arizona, Oklahoma and Hawaii.

None placed in the money; their times or scores were not available.

In the two days of rodeo, not one cowboy completed a qualified bull ride, and only a couple managed broncs.

In saddle bronc, up-and-coming cowboy Clay Buchert of Tonasket held on for the only qualified ride. He claimed $1,300 on his 67-point ride.

In tie-down roping, Nathan Clawson of Olympia led competitors with a 9.6 second run, good enough for $ 1,280.

Break-away roper Makenly Davis of Pendleton, Ore., made short work of her competition, out-pacing second place by nearly fourth-tenths of a second. Her run of 2.22 seconds was good for $1,450.

Ryan Bothum traveled from his hometown of Checotah, Okla., to Basin City to compete in steer wrestling, also called bulldogging. Diving from his horse and grabbing his steer by the horns, he wrestled it to the ground in 4.6 seconds, earning $1,000.

The fastest team ropers in the field this year were Jack Fischer of Ellensburg and Brent Falon of Yakima. The header and heeler combination lassoed their prey in 4.5 seconds to earn $1,173.

Omak’s Krista Marchand was the fastest competitor in barrels, completing the clover leaf pattern in 17.50 seconds to take home $1,653.

Marchand added another $250 in prize money by finishing sixth in break-away roping in a time of 3.40 seconds.

Friday night’s performance concluded with an arena dance and band.