By STAFF AND NEWS REPORTS

Department of Ecology issues drought advisory for most of the state 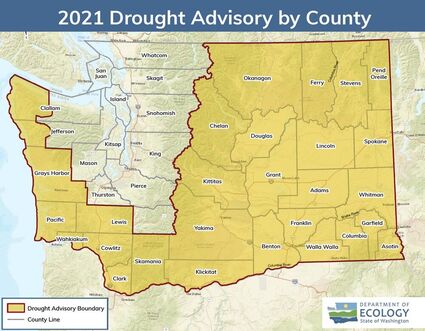 The map above shows counties affected by the Department of Ecology's drought advisory. Affected counties are outlined in bold and darker.

OLYMPIA - Following an extremely dry couple of months, the Department of Ecology has issued a drought advisory for most of Washington state, including all areas east of the Cascade Mountains, portions of southwest Washington and the Washington coast.

March through April was the fourth driest such period for Washington state since 1895. There are growing concerns for farmers and ranchers in Eastern Washington. Early observations of crop stress and expectations for reduced yields are being reported, said water resources planner Jeff Marti. Marti said he's already heard anecdotal accounts of p...