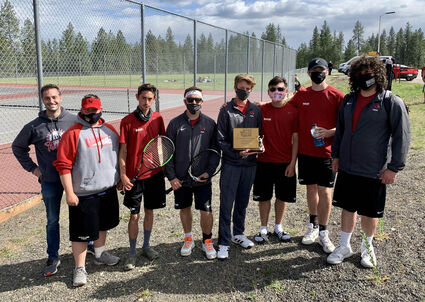 The Medical Lake boys' tennis team emerged as the winners in the 2021 Northeast A League District Tournament staged May 7 and 8 at Riverside High School. RJ Puckett and Isaac Barr took second place in the doubles' tournament while Ryen Gibby and Cameron Dickey finished third.

"This is the first trophy to enter the school's tennis trophy case in quite a few years," boys head coach Brian Tellez wrote in an email.

The two-day tournament played at Riverside High School saw Medical Lake get a pair of wins (including a bye) from Josh Burt in singles. That included a 6-1, 4-6, 6-1 win over Jayden Lentz (Freeman) that moved him to day-two. Tristan Francis also won twice in singles and ad...