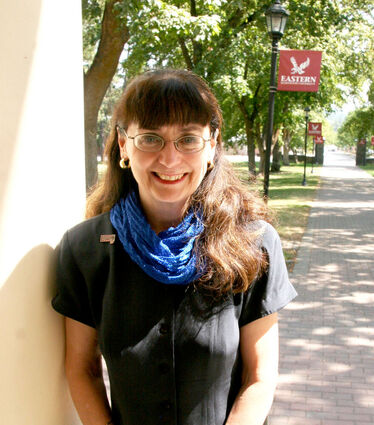 Eastern Washington University's first woman president Dr. Mary Cullinan recently passed away at age 72. The university was notified May 3 of her passing.

CHENEY - Eastern Washington University officials announced on Monday, May 3, that the university's 26th president and first woman to serve in the position Dr. Mary Cullinan had passed away at age 72. Details of her passing have not been disclosed, and the family has asked for privacy.

The news was a heavy blow to many in the campus, Cheney and Spokane region.

"I have some sad news to share with you. I have recently learned of he passing of Dr. Mary Cullinan," May wrote in an email to the campus May 3. "I don't have any details to share, but it is a shock. It is the wishes of her family that no one reach out to them at this time, and the university will be respecting these wishes for privacy."

Cullinan became Eastern Washington's president in 2014, replacing Dr. Rodolfo Arevalo who held the position since 2006. Besides the university's first woman president, Cullinan was also the second woman to serve in that role at a Washington state institution, the first being Phyllis Wise at the University of Washington from 2010-2011.

"I am thrilled to accept the position of president of Eastern Washington University," Cullinan said in a June 19 Cheney Free Press story. "EWU is a vibrant institution with powerful commitments to student success and strong connections with the region. It will be an honor to serve as president."

Prior to coming to Eastern, Cullinan served as president of Southern Oregon University in Ashland from 2006. During her tenure, university officials said she helped increase enrollment from 1,300 to over 7,000 students as well as establishing new relationships with nearby Rogue Community College.

But her tenure also created controversy, especially near the end. State reductions in funding to SOU required the elimination of up to 80 faculty positions, something Cullinan was charged with overseeing by the state's board of trustees. As might be expected, the move was unpopular in Ashland, and Cullinan received a 63% no confidence vote from the faculty in March 2006 – just short of the two-thirds majority needed to call for her removal from office.

It was this latter issue that followed her to Cheney when she took the helm at Eastern Washington in late-summer 2014, and together with moves from the university's board of trustees, likely contributed to an at-times strained relationship with EWU faculty. In 2008 – 2009, Eastern's trustees endorsed a reduction in the number of degree/major options offered at the university, but there was no follow through to implement the decision.

As enrollments flattened, some revenue returned in 2013 – 2015 but in 2015, tuition was cut 20 percent in response to the College Affordability Act. Enrollments began to tail off and revenue growth slowed.

The board's push for realignment resurfaced, this time with vigor. A process began last summer, and May is expected to deliver a final report and recommendation to the board later this month.

The realignment was compounded by financial fallout from the Covid-19 pandemic, leading to the university laying off up to 400 classified and exempt staff beginning last May. Through this, Cullinan bore the brunt of the criticism. In faculty evaluations conducted in February 2020, 70 percent of those responding gave her a grade of "poor or needs improvement" in the "Vision" category, leading to a Faculty Organization Senate no-confidence vote on June 22.

Cullinan and members of the administration did lay out a vision for the university at the May 29 trustees meeting that she described in a July 9 Free Press story as "leaner and more focused." The vision - called "Eagle Flight Path" - was shaped by the two-year internal process reexamining the university's programs and driven by changes in the landscape of higher education - including declining enrollments, more online options and requirements for a more comprehensive education tailored to the professional needs of students and the needs of the Eastern Washington region.

It was a vision Cullinan acknowledged required a lot of change.

"Change is hard, and this is not just a tweaking," she said in the July 9 story. "This is really a look at what we do as an institution. It's scary to people. It's scary to me."

As part of that vision of change, Cullinan played a key role in the partnership with Avista to build the Catalyst Building near Spokane's Riverpointe campus and in obtaining state funding for construction of the Interdisciplinary Science Center on the Cheney campus. She also worked to increase the university's relationship with other institutions for programs at Riverpointe and collaborations with regional community colleges.

Cullinan grew up in Washington D.C where her father was assistant postmaster-general under President Dwight Eisenhower. He later became a speechwriter for various senators, congressmen and other influential politicians-including presidents John F. Kennedy and Lyndon Johnson.

Cullinan did dual-duty as Provost and Vice President for Academic Affairs as well as professor of English at Stephen F. Austin State University from 2003-2006. She was also a finalist for the president's position at Youngstown State University in Ohio. 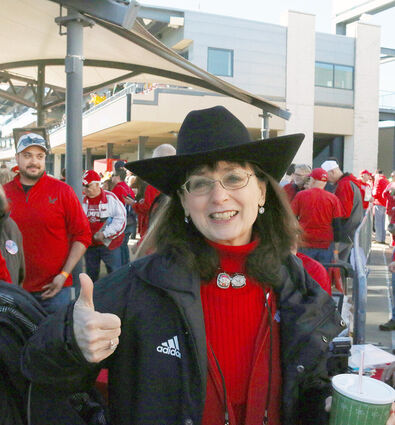 Former EWU President Dr. Mary Cullinan giving the thumbs up for a hoped for Eagle victory in the 2018 FCS national title game against North Dakota State University in Frisco.

Despite the unease from some faculty at her hiring in 2014 and the turmoil associated with her departure, Cullinan said she always carried the mission of the university close to her heart.

"I am committed to keeping the health of this institutions," she said in July 2020. "That has to be my paramount goal."