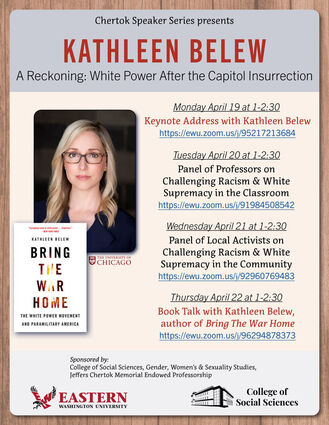 To find out how to attend a Zoom session of the upcoming Chertok Speakers series, go online to Inside EWU.

CHENEY - The insurrection that took place Jan. 6 at the U.S. Capitol Building caught many people off guard not only in the United States but around the world. In foreign lands where democracy's survival has struggled to overcome the shackles of totalitarianism, people watched in disbelief as the heart of the world's leader in championing democracy was attacked by individuals bent on stifling its performance.

For author, historian, author and teacher Kathleen Belew, the insurrection was another manifestation of a movement that has grown in strength in the shadows of this nation and under auspices that have masked its real intent.

"This movement is often called white nationalist, but too many people misunderstand that moniker as simply overzealous patriotism, or as promoting whiteness within the nation," Belew wrote in an Aug. 4 opinion piece in the New York Times. "But the nation at the heart of white nationalism is not the United States. It is the Aryan nation, imagined as a transnational white polity with interests fundamentally opposed to the United States and, for many activists, bent on the overthrow of the federal government."

Belew's opinion piece came one day after a white nationalist shot up a Walmart store in El Paso, Texas, killing 23 and wounding another 23. Next week, Belew brings her insights into the white power movement - developed over 10 years of research for her 2018 bestseller "Bring the War Home: The White Power Movement and Paramilitary America" - to Eastern Washington University as part of its Chertok Speaker Series "A Reckoning: White Power After the Capitol Insurrection."

According to her website, Belew drew upon information for "Bring the War Home" through previously classified FBI documents and personal testimonies from those involved in the movement to "explore how white power activists created a social movement through a common story about betrayal by the government, war, and its weapons, uniforms and technologies." The movement reached a peak with the bombing of the Alfred P. Murrah Federal Building in 1995 in Oklahoma City, killing 168 people - including 19 children.

"This movement was never adequately confronted, and remains a presence in American life," Belew writes.