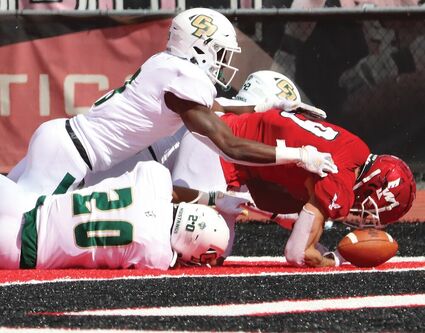 Eastern wide receiver Andrew Boston fumbles the ball on the goal line. The ball was recovered in the endzone by Eastern running back Dennis Merrit for a touchdown.

CHENEY - It was a great day to wear Eastern Washington red; it was not at all a good day for a group of Cal Poly coaches who once wore those colors.

Jump started by scoring four first-quarter touchdowns and using just 3 minutes, 59 seconds off the clock to do so, the Eagles performed their own stampede on the way to a 62-10 victory over the Beau Baldwin-led Mustangs at sunny Roos Field.

Along with Baldwin, who spent nine seasons as Eastern's head coach (2008-2016) and four as an EWU assistant (2003-06) the four members of his staff who have past connections to EWU are Paul Wulff, Erik Meyer...