Barrierre returns to form in 45-13 win over NAU 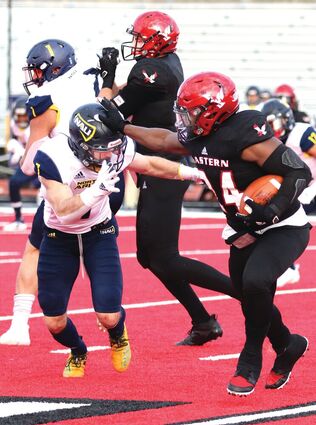 EWU running back Tamarick Pierce uses a stiff arm to keep Northern Arizona defensive back Morgan Vest away from a tackle during last Saturday's win over the visiting Lumberjacks.

CHENEY - Maybe Eric Barriere also caught that notion expressed on broadcast of Eastern Washington's opening week spring football loss to Idaho: That the defenses were ahead of the offenses at this early juncture.

Because the Barriere of old emerged, threw for 413 yards on 29-of-49 passes and three touchdowns in a 45-13 Big Sky Conference spring season football victory over Northern Arizona March 6 at Roos Field. It was the first game on the stadium's new AstroTurf installed last summer.

Perhaps showing some rust from months of being away from actual game conditions, the All-American Barrier...