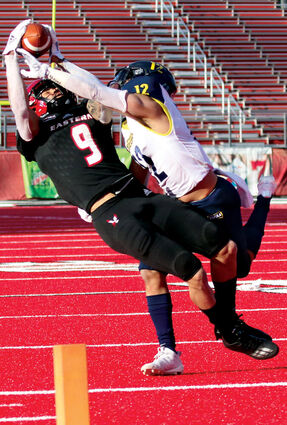 Eastern Washington wide receiver Andrew Boston staves off the attempt of Northern Arizona defensive back Anthony Sweeney to make a catch during the Eagles win over the visiting Lumberjacks last Saturday. The fate of the Eagles football program and financially-strapped Athletics Department in general is being debated by the administration, campus and regional communities and the Board of Trustees. Game story on Page 9.

(Editor's note: The first part of this story dealing with the four options appeared in the March 4 issue of the Cheney Free Press.)

CHENEY – Eastern Washington University's Board of Trustees was presented with four options for the institution's struggling Athletics Department by the PICTOR Group consulting firm at the board's Feb. 25 meeting.

Those options are: staying put in NCAA Division I athletics and in the Big Sky Conference, remaining in D-I but dropping football and moving to one of two other regional conferences, moving down to NCAA Division II or dropping even further to NCAA Di...