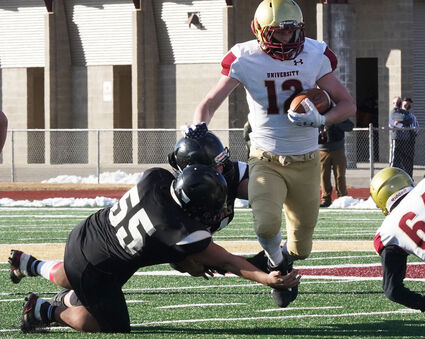 Cheney defensive lineman Eti Ena gets a hand out to trip up University running back Kyle Douglas (12) in the fourth quarter of the Blackhawks 28-21 season-opening win over the Titans.

SPOKANE VALLEY – It may not have been technically clean, but last Saturday's long-awaited season-opener for the Cheney High School football team was sure entertaining.

Playing their first game since last October 2019, the Blackhawks used a stout, attacking defense to make up for an erratic offensive effort, rallying from a seven-point halftime deficit to knock off University 28-14 on a sunny, wind-swept Titans field in Spokane Valley.

The key for Cheney was Karl Barsness. The senior defensive back scored twice, including a 95-yard interception return for touchdown inside the final minute that sealed the Blackhawks win.

University got on the board first, scoring near the end of the first quarter on a 32-yard pass from quarterback Tre Buchanen that bounced off his original receiver in the end zone and into the arms of teammate Tyler Boden.

The score stayed at 7-0 until the first possession of the third quarter when Barsness scooped up a Titans' fumble and raced about 40 yards to the end zone, tying the game at 7-7. The Blackhawks caught a break after an interception by Titans free safety Ricco Longo set University up inside Cheney's 30, only to have the defense hold and push University back.

Dusten Butikofer then returned a shanked University punt to the Titans 40, and the Blackhawks ground game pushed the ball from there, with Gabe Gerber scoring from about nine yards out. A Cheney interception and run to the 5 on the subsequent Titans series eventually led to Gerber's second touchdown run - a 1-yard plunge that put the Blackhawks up 21-7.

But University didn't wait long to respond as Ricco took the ensuing kickoff and raced 95 yards to the end zone, trimming Cheney's lead to 21-14, which is where it stood until the final minutes of the game when University launched one last attempt to tie the score.

The Titans drove inside the Cheney 20 with 1:19 to play, and appeared to stall when Michael Odood intercepted a Buchanen throw at the 10. The play was nullified on a Blackhawks roughing the passer call, giving the Titans the ball on Cheney's 8.

Two plays later from the same area, Barsness stepped in between a Buchanen to Ricco throw in the right flat, and scampered 95 yards for his second defensive score, preserving the Blackhawks first win in their return to the Greater Spokane League.

Both teams had a number of rough spots where penalties ended promising starts to possessions. For Cheney head coach Bobby Byrd, the final was likely a reflection of what his team is composed of in its first year in the 3A classification and in the GSL.

We will have a squad anchored by a strong senior class," Byrd said in previewing his team. "Behind them is a good group of juniors and sophomores who are going to contribute all over the field."

Among those seniors are University of Montana-bound Ben McGourin at linebacker, Van Vega at cornerback, Cole Williams at safety, offensive lineman Eti Ena and James Whitely, wide receiver Ryan Reickmann and Gerber at running back.