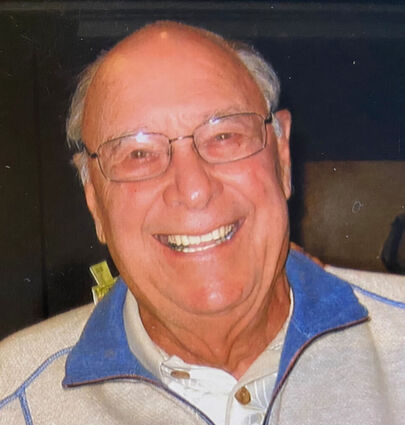 After graduating from Wayzata High School, John briefly attended the University of Minnesota before deciding to join the U.S. Air Force was a better path. After serving 26 years, he retired with a vocation in meteorology, a passport full of world travel and good friends that would last a lifetime.

John married Shirley (Gray) in 1957, and so she joined the adventure. They added two children, Lisa and Michael, and they formed a tight unit as they traveled the world.

John was good at his job, worked hard, and not always, but mostly followed orders. Because of this he was awarded numerous accommodations including: the Bronze Star, Meritorious Service Medal, Air Force Commendation Medal, Army Commendation Medal, Vietnamese Cross of Gallantry with Palm, among others.

Throughout his life John had a special talent for mentoring young people. From starting a Little League baseball program in Guam to advising young airman, student athletes and even his own children’s friends…all  benefited from his leadership, compassion and willingness to listen.

The Dacey’s ultimately settled in Cheney, Wash. where John attended Eastern Washington University, earning a degree in General Studies. John went on to work as a supply technician in the ROTC Department at EWU. John also became a passionate champion of all things Eastern Athletics, serving on the Eagle Athletic Association Board for over 10 years and acted as President of the Board for two years.

Following his second retirement, he landed a part-time dream job in the Pro Shop at Indian Canyon Golf Course. An avid golfer, John joined great friends in a bi-weekly golf group. After 60-plus years of experiencing the ups and downs of a golfer, John achieved the ultimate goal…..a hole in one on No. 16 of Downriver Golf Course.

For those keeping track, John took his third and final retirement at the age of 68. He continued his devotion to golf, which was made easier by John and Shirley spending winters in Hawaii.

One of John’s most important contributions to the world was his capacity for kindness and friendship. John made friends, kept friends and formed significant relationships with people of all ages and walks of life. John could tell a good story, sing a good song (off key), laugh from his belly, stand by his word, lend a hand, graciously concede a good point and share the joy of life.  Right up to the end of his days he charmed, and was charmed by the nurses and aides at Horizon Hospice Care, whom the family would like to thank for their excellent care.

Additionally, John’s love of family knew no bounds. He is preceded in death by parents John and Catherine, sister Ann, brother Dennis, niece and Godchild Marnie and numerous friends and comrades. John is survived by beloved wife Shirley; couldn’t-be-prouder-of daughter Lisa; accomplished and kind son, Michael; respected and loved son-in-law, Craig; gift-from-heaven daughter-in-law Tanya. There are numerous step children, grandchildren and great grandchildren, as well as loved sisters, Catherine and Mary and cherished nieces and nephew-in-laws. And of course, his family of friends.

John will be interned at a private ceremony at the Veterans Memorial Cemetery. The family will host a Celebration of Life at a later date during summer. If you so desire, memorials may be sent to the Eagle Athletic Association, Disable American Veterans (DAV), or a charity of your choice.